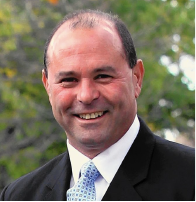 Angelo “Skip” Saviano has been a trusted and proven leader in the Elmwood Park community for over 25 years. He was first elected Leyden Township Supervisor in 1989 and then went on to serve his constituents on the state level until recently retiring as Assistant Minority Leader in the Illinois House of Representatives.

Saviano is known as a staunch advocate for senior citizens and individuals with special needs and has worked diligently to enhance their lives. As a State Representative, he consistently was a sponsor of senior activities and legislation focused at protecting their well-being; he firmly believes that seniors should not have to struggle to pay their property taxes, utilities, and prescription medication.

Angelo “Skip” Saviano was regarded as one of the most influential and effective members of the Illinois legislature. His long list of credentials and dedication to public service has earned him distinctive honors in the Illinois General Assembly.

Saviano has committed himself to working on behalf of those with special needs. He has served as the chairman of the West Suburban Special Recreation Association’s (WSSRA) annual “Derby Gala” for twelve consecutive years, and has obtained grants on behalf of the organization from companies such as AT&T. Because of his dedication to helping those in need, Leyden Family Services has named Saviano chairman of their annual fundraising event for 2012.